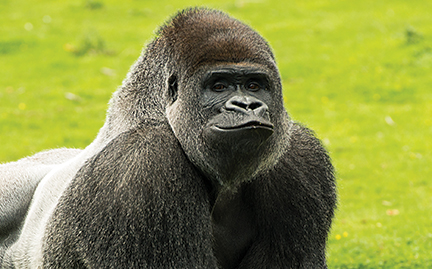 On May 28, 2016, a three-year-old boy visiting the Cincinnati Zoo fell into the moat at the Gorilla World habitat. Witnesses claim they heard the child say he wanted to go into the gorilla enclosure. The boy then climbed a three-foot-tall fence, crawled through four feet of bushes and then fell fifteen feet into a moat of shallow water. Zoo officials immediately signaled for the three gorillas in the habitat to return inside, and two females did so. However, the third gorilla, the inquisitive 440-pound (200 kg) male silverback, Harambe, climbed down into the moat to investigate the child splashing in the water.Over the next ten minutes, Harambe became increasingly "agitated and disoriented" by the screams of onlookers. He dragged the child through the water, occasionally propping him up when he sat, or pushing him down when he stood. Harambe exhibited "strutting" behavior – walking around with legs and arms stiffly extended to appear bigger – a bluffing move, though one with inherent danger should he throw or drag the boy around too roughly. Harambe then carried the boy up a ladder out of the moat onto dry land. Afraid for the boy's life, zoo officials made the decision to kill the gorilla, doing so with a single gunshot. Cincinnati firefighters said the boy was between Harambe's legs when the shot was fired. Harambe was killed one day after his 17th birthday.